This field has a sodium affected soil. Magnesium levels in this soil are about 30%. The ground becomes very hard when it dries.

There was 3 tons of PRO CAL 40 applied to this field prior to the corn being planted. When soil sampling the field during the year of the soybeans (one year after application) the soil where no PRO CAL 40 was applied could not be penetrated by a soil probe. The area treated with PRO CAL 40 was still very firm, but a soil probe could be pushed into is quite easily.

When gypsum is applied to sodium affected soils, the soil is almost like a big sponge. The gypsum dissolves rapidly and is quickly absorbed by the soil. The change in soil structure and friability can be noticed soon after application although total soil reclamation will take several years. 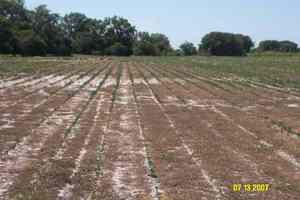 Area in front is untreated area. Better soybeans in background were treated with PRO CAL 40 in the spring of 2007. 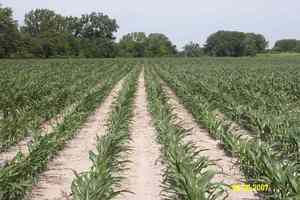 This is the same spot in the field as the previous picture. The area in the back was treated with PRO CAL 40. The area in the front was untreated. The corn is a little smaller and poorer color. This corn was planted during the same year of application. 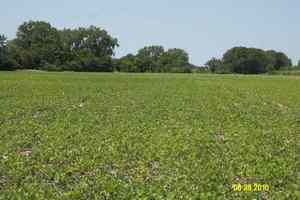 This is a picture of the same field in 2010 after another (2 ton/A) application of PRO CAL 40 was applied. The soybeans look great and there is no indication that this field had an alkali soil. What a difference from 2007!