You are here: Home / Blog / General / Weatherproof Your Soils 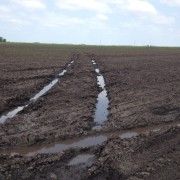 This spring was another challenge for many producers due to the frequent rains and wet fields.  Yet again we had customers tell us that they could distinguish the fields where they had applied PRO CAL 40 gypsum.  The soils in these fields were less sticky and seemed to b 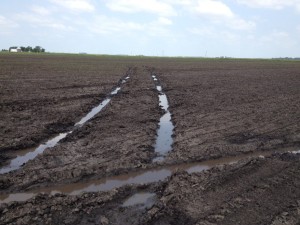 e more dry allowing them to plant these fields when others were not ready.  In some situations, it meant not having to replant while others had to.  Using PRO CAL 40 weatherproofs your soils so field work can be more timely.  There would have been much less replant this spring if those fields would have had PRO CAL 40 applied to them.  It also increases pore space so that water can be stored for use later in the growing season.

When gypsum is used it changes the calcium/magnesium ratio in the soil thus improving the soil condition.  Magnesium is what makes soils sticky and difficult to manage because magnesium molecules attract water molecules (as many as 22 water molecules around each molecule of magnesium).  At first glance one may think this is good, but this water is held tight and is not available for plant use.  It simply makes soils more difficult to manage, become very hard when dry and causes clays to “slick off” creating more sidewall compaction problems.  Adding calcium is an inexpensive way to improve drainage.

In addition to this, rain water and snow contain very few electrolytes (distilled) which means that the rainwater picks up electrolytes from the soil.  This is good in that it is a driving force for getting minerals into solution, but it is bad because it causes clay soils with less than adequate electrolytes to become dispersed.  This causes a surface seal at the soil surface reducing infiltration from subsequent rain events and reducing the soils ability to “breathe”.  This dispersion can happen in some soils with as little as ¾ inch of rain.  The addition of PRO CAL 40 gypsum provides sufficient electrolytes to prevent this dispersion from happening.  This means better air/water exchange by the soil.

Gypsum use also increases root growth by increasing the calcium level in the soil and increasing pore space for roots to grow.  The more root growth the greater the nutrient availability.  It is critical to have actively growing roots to assure sufficient calcium nutrition at the peak uptake (during the reproductive stages) because calcium is only taken up at the root tips.

Why are Diseases Becoming More Common?

What Difference Does it Make?
Scroll to top