You are here: Home1 / Blog2 / General3 / What Difference Does it Make? 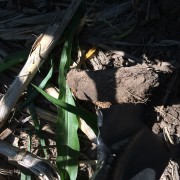 What Difference Does it Make?

This statement has been made famous by one particular politician, but farmers sometimes ask this question about various aspects of fertility and crop management.  One of the areas that are overlooked is the importance of having soil conditions that provide for good root growth. Out of sight….out of mind is often how soil is treated.  The picture to the right shows roots that are growing laterally due to the hardness of the soil.   You can also notice the poor soil structure and the layering of the soil exemplified by the horizontal cracks.   If roots aren’t able to exp 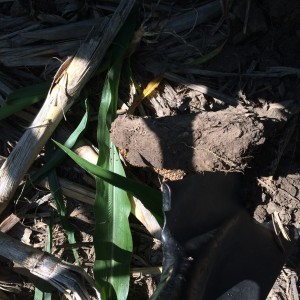 lore as much soil, nutrient uptake and water efficiency are both reduced.

Dr. Stan Barber, Purdue University back in the 1980s showed that two basic facts about fertility was that it wasn’t necessarily the quantity of fertility in your soils, but more importantly the placement of the nutrient relative to the root system.  He also found that by increasing the root surface area he was able to increase nutrient uptake.  This explains why it “does” matter how large of root system you have.

In the case of calcium, it is only taken up at the root tip, whereas many other nutrients can be absorbed through the root even in older roots across concentration gradients.  This is why it is critical to promote as much new root growth as possible.  Calcium also stimulates greater root growth.  Sustaining root growth later in the season is critical for all nutrients, but particularly those that have a high need later in the season such as calcium, sulfur and boron and are immobile in the plant.

Gypsum is one of the most economical, more soluble products to use to supply calcium to your crop.  Gypsum also is one of the best products to use to improve soil structure since the calcium flocculates (groups together) clay particles which may otherwise be dispersed (or separated).  This flocculation allows for more pore space to be created which enhances aeration plus more storage for water.  With greater pore space you also create an environment that is better for root growth and for microbial activity and earthworms.  Both of these produce glomalin and other substances that act as glues to improve soil structure and integrity.

What is the Difference Between PRO CAL 40 and Granular Gypsum?
Scroll to top