You are here: Home1 / Blog2 / General3 / Yields Can be Affected by Relative Magnesium Levels 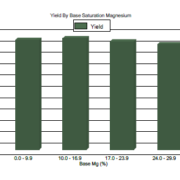 As we analyze yield data from our clients each year it is interesting to see what soil test factors have the greatest impacts on yield.  This can vary from year to year, but we often see the influence of high magnesium on yields.  You can see below from both soybean and corn 2018 yield data from a customer’s field.  It is more prevalent in stress years, however, than in years when we have ideal growing conditions.  This specific customer had much above average moisture this year.

A 9 bushel difference between the optimum % Mg levels and the Highest % Mg levels across 900 acres. ($72/acre more revenue) 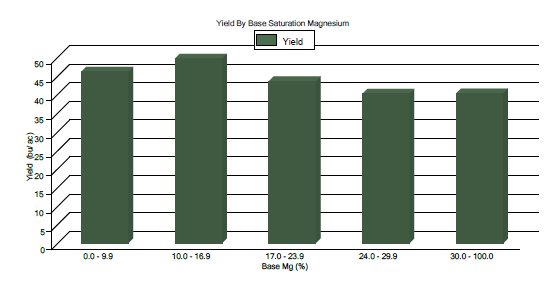 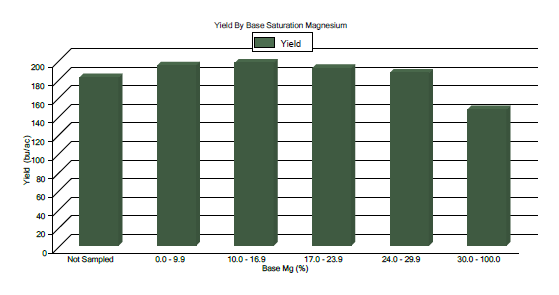 Why are yields affected by high magnesium levels in stress years?

Less Air in the Soil

If  the soil contains more water, the soil doesn’t warm up as fast in the spring.  Colder soils also affect microbial activity and early plant growth and nutrient availability.  Consequently, we prefer better placement of nutrients on these soils. Soybeans planted earlier in these soils will mean slower nodulation and less nitrogen fixation.

Magnesium also will weaken the stability of the soil aggregates (clay particle groupings).  This will mean soils will become dispersed more easily and lack a good soil structure. This can decrease root growth, especially fibrous roots.   As these soils dry, they will become hard and will crack open.  This causes roots to be torn and not able to take up water and nutrients from deeper depths during drought periods.  Some of the largest yield differences due to high magnesium soils, I have seen during drought periods.  In 2012 (drought year), I was notified by an extension agronomist that magnesium levels in the soil was the best correlation to yield differences.  The soils with the highest magnesium levels had the lowest yields.

Air and Water Management is Most Important to Yield!

It is interesting that so much emphasis is put on fertility levels and the influence they have on yield.  It is more common to see factors that affect air and water management have a greater affect on yield.  One tool that is effective in lowering % magnesium and improving air and water management in soils is gypsum.  Our observations show that we can lower the % magnesium by about 5% for each ton of gypsum we apply, and this greatly changes the soil condition and how the soils perform.  Our observations also show good yield responses especially in those more stressful years, either too wet or too dry.  Plus, as we plan to plant crops earlier, gypsum applications make the soils planter ready sooner (less sticky) allowing you to get in the fields when you aim to.  With less bound water and more air, the soil will actually warm up sooner.

As the data above shows, to reduce the affects of stressful years, it is best to have magnesium levels in the 10 to 16% range.  The higher your levels are above this, the greater the risk of yield loss.  Gypsum can improve yields even in the 10 to 16% range if your soils have a CEC above 20 since these soils will have greater than 35% clay content and will likely be colder and wetter soils with less aggregation.  The gypsum requirement may be less depending upon how high the CEC is.  Soils may also respond to the sulfur in gypsum if sulfur tests show low.

Know your water pH and hardness especially when using Procidic.
Scroll to top