You are here: Home1 / Blog2 / General3 / Why Gypsum Works in Your Soils: Part 4. Gypsum offsets high magnesium in... 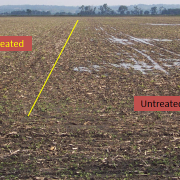 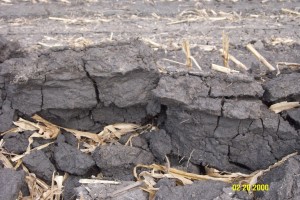 In the past and in many “Soils” books magnesium and calcium were put in the same category concerning effects on soil physical properties.  The reasoning was that they both had two positive charges.  In recent years, these ideas have changed.  Magnesium has a greater attraction for water and thus has a larger hydrated radius than calcium.  This causes soil particles to remain farther apart and more dispersed.  For this reason soils with higher magnesium contents have less water stable aggregates and less pore integrity.  These soils usually are stickier and remain wetter and saturated longer.   If saturated, root growth is diminished significantly.

What does this mean for you, the farmer?  These soils with high magnesium remain wetter and colder in the spring and timing of field operations are more difficult.  Sidewall compaction is more common in these soils since they tend to “slick off” with any sheering. The picture above shows a soil with a magnesium content greater than 25% and a CEC greater than 30.  Notice the poor soil structure and how compact the soil is (less soil porosity).  By increasing the calcium concentration relative to the magnesium, you can change the properties of these soils greatly.  If the pH is low, you can increase the calcium concentration relative to magnesium by adding high calcium lime.  If the pH is 6.0 or above an effective means of increasing calcium relative to magnesium is adding gypsum.  Gypsum is more water soluble than lime at a pH above 6.0 and will give you a faster response.  With gypsum the calcium will replace the magnesium on the soil particle and the magnesium will react with the sulfate to form Epsom salt and will be leached deeper into the profile or removed with drainage water.   This means that you can be more timely with your field operations. 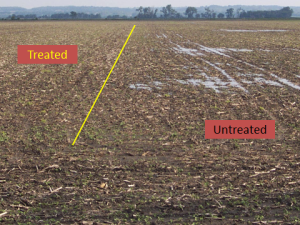 Nitrogen efficiency is decreased in soils with higher magnesium since the soils often times lack oxygen and soil nitrogen is denitrified or lost.  Also since microbial activity isn’t as great when oxygen is depleted there isn’t as much organic nitrogen released to the growing crop.  Refer back to the blog on calcium and having a good balance between nutrients to understand why an imbalance of calcium and magnesium is detrimental.

In summary, gypsum is a good source of water soluble calcium as was highlighted in a previous blog.  This calcium will displace magnesium on the soil particle increasing calcium base saturation.  This will improve soil physical properties.  As the magnesium is displaced, it will react with the sulfate ion and will leach deeper into the profile or be removed with drainage water.