You are here: Home1 / Blog2 / General3 / Why Gypsum Works in Your Soil: Part 6 Other Factors 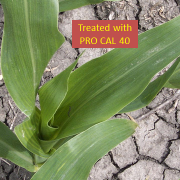 There have been nearly 50 different benefits listed for gypsum. It almost gives you the opinion that it does everything, though we know it doesn’t.  But when I hear someone say there is no benefit to using gypsum in their soils, I have to question if they understand the value of gypsum.  Previous blogs have listed five reasons for farmers to often use gypsum.  Following are a few other benefits observed.

Sulfur as a plant food.

Gypsum on a dry basis contains about 23% calcium and 17% sulfur.  That means that if you apply one ton of gypsum you will apply about 340# of sulfur per acre.  That is enough to meet several years of crops demands.  It also makes it one of the least expensive sulfur sources you will find in the market place today. This sulfur is in the sulfate form, the plant available form of sulfur.  Since an increasing number of soils are deficient in sulfur applying gypsum can serve to solve this deficiency.

Sulfur effect on other nutrients….manganese, iron and zinc. 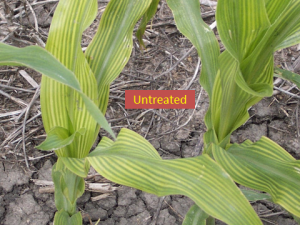 Sulfur can enhance the availability of many other nutrients.  We have observed this with both iron and manganese.  To the left is a picture taken from a field where the corn is showing a manganese deficiency.  This was confirmed by a plant tissue test. 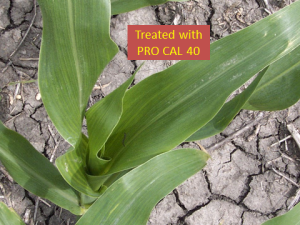 The picture to the right was from the same field where two tons of gypsum had been applied two years previous.  As you can see the corn was much greener and without the typical symptoms of manganese deficiency (also supported by plant tissue testing).  Research has shown this can happen through sulfur reactions in the soil affecting the manganese availability.  The presence of the sulfate ion in higher concentrations serves as a reducing agent for manganese oxide making the manganese more available.  The same could also be true of iron.  We have also observed that plant tissue tests taken from our fields where we have applied gypsum for several years are much higher than other fields where gypsum has not been applied.  Since manganese levels have been decreasing in many soils over the past 15 years this is a significant benefit of gypsum use.

Gypsum has shown to improve manganese availability and microbial activity where glyphosate is used since the calcium can chelate and detoxify the glyphosate.

Sulfur is also vital for healthy soil as it is needed to boost the immune system of the microbes in the soil.  By improving the immune system you have healthier microbes and a healthier soil.  Then these microbes pass sulfur into the plant for its immunity.  There have been numerous studies that have shown that sulfur is very useful in reducing the incidence of a myriad of diseases in crops.

Anyone who farms high magnesium heavy soils understands that nitrogen efficiency is less in these soils.  In other words it takes more nitrogen to produce a bushel of grain.  These soils have a higher nitrogen requirement to attain equivalent yields than those with less magnesium.  Studies done at Purdue have shown that these soils fix more ammonium nitrogen between the clay layers rendering it less available.  Their work also shows that where gypsum is applied to these soils, less nitrogen fixation occurs by the clays.  In addition, gypsum improves drainage, so soils are less likely to become anaerobic and lose nitrogen to denitrification.  All this means less nitrogen being applied and less risk of nitrogen being in streams, etc.

Still more…… Research that was done in the early 1980s at North Dakota State showed that nitrification inhibition occurred with both thiosulfate and sulfate forms of sulfur.  In those studies concentrations of 32 ppm in the plow layer was enough to give 80% inhibition of nitrification.  With most sulfur sources, unless you apply it with the nitrogen, you will not reach this concentration in the proximity of the nitrogen.  However, at the rates of gypsum we often apply we do reach levels that exceed 32 ppm in the plow layer.  It could be hypothesized that we could get some nitrification inhibition with the use of gypsum in some soils.

Where farmers have applied feedlot lagoon water for many years through pivot irrigation, an imbalance of potassium is observed.  This is because potassium is very soluble and will be concentrated in the liquid water of the lagoon.  Past experience has shown that once %base saturation of potassium exceeds 7% crop production in these fields decrease due to the imbalance.  Potassium can also act similarly to sodium at very high levels causing soil structure to deteriorate and soils become hard.  Gypsum applications in these soils will improve the soil structure of these soils creating a better balance of cations, reducing the % potassium to manageable levels and improving yields.

When we apply gypsum to soils, we are supplying calcium.  Calcium helps buffer soils from acidity.  If we can maintain a higher concentration of calcium the soil pH will not drop as quickly.  Although gypsum does not contain carbonate, so it doesn’t neutralize hydrogen like limestone does, it does contain calcium which will help maintain a soil pH and keep it from dropping as quickly.

We have had many users of gypsum start by applying gypsum to their poorest soils first and then continue with their better soils.  Soil drainage is improved when applied in terrace channels thus improving production in these soils.  Eroded hillsides have also shown to be very responsive to applications of gypsum due to improved drainage, better root development, sulfur nutrition plus other factors already mentioned.

Cover crops are being promoted to improve soil health, but in some soils, due to their impermeability or low levels of calcium in the subsoil, the root growth of the cover crop is reduced limiting their benefits.  The picture above shows a field where tillage radishes were grown to loosen up the soil.  As you can see the radishes are actually pushing above the ground because they couldn’t penetrate the dense soil.  When the radishes were dug, as the next picture shows, the roots only grew about 4 inches before they were severely restricted. 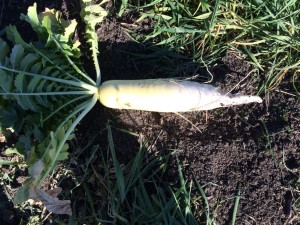 Gypsum will move through the soil into the deeper layers increasing calcium levels and mellowing the soil so that root systems can penetrate deeper and more extensively.

When gypsum is applied to soils where drainage tiles have been installed, tile output is increased.  There have even been cases where tiles had quit running and once gypsum was applied they started running again.  This is a testament to how gypsum will improve infiltration of soils and soil porosity so that water will move through the soil profile.  If more water is going into the soil profile then less water will be running off of the field during rainfall events.  This means less soil loss and less nutrient loss with the sediment.  The soil is a very good filtering system to keep nutrients in the soil profile and not leaving in the drainage water.  Some studies have shown that most phosphorus that is found in drainage water from tile lines is through phosphorus movement to tiles through macro-pores such as cracks.  Where we have applied gypsum we have seen that we have less large cracks that go so deep.  This is beneficial since it relates to better soil structure, but also less risk of nutrients being lost through these cracks to drainage tiles. 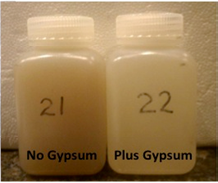 phosphorus.  Also, gypsum improves soil structure.  This means that a clump of soil is less likely to deteriorate with rainwater and so there is less soil sediment in the runoff as is shown in the picture to the right. 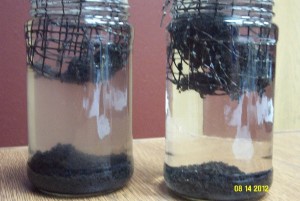 The picture above of a slake test using the the same soil, one with gypsum applied to it and the other with no gypsum applied.  You can see that where no gypsum had been applied to the soil that the soil clump deteriorated when placed in water and you can also notice how cloudy the water is compared to the soil with the gypsum.  You may ask yourself what affect will  this have on your soil in your field longterm?

I think you can see that there are many short term benefits to gypsum use, but just as many long term benefits.  This is why many long time gypsum users see their yields continue to increase over time.  Remember, however, as with any soil amendment or crop input monitor your soils with soil tests so that you realize the most return from your inputs.

Suppression of White Mold Where Gypsum Is Applied
Scroll to top