You are here: Home1 / Blog2 / General3 / Why Gypsum Works in Your Soil: Part 1 Reduces Surface Sealing 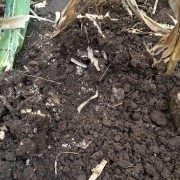 There are many reasons why we see responses from gypsum in agricultural soils.  This blog is the first of six discussing the benefits of gypsum.

Gypsum gives responses in most soils by supplying a good source of electrolytes which rain water can react with.  Without electrolytes present, rain water will cause greater soil dispersion and surface sealing.  The benefit of having gypsum soluble, but not too soluble, is that it will not leach quickly through the soil profile and will stay near the soil surface where it can reduce surface sealing.

With heavy rains in many areas this year surface sealing could be a greater concern since the electrolytes in the soil will be depeted.  Gypsum applications will alleviate these soil problems.

The solubility of gypsum is about 2.05 g/L in water (77 degrees Fahrenheit).  This is about 200 times the solubility of most liming materials.  Fineness of grind or particle size will also greatly affect dissolution rates and solubility of both lime and gypsum.   In soil, it has been determined that gypsum passing a 100 mesh screen will solubilize at a rate of about 35# per one inch of rainfall.

In the picture to the left you can see the white gypsum that is still visible in the soil from the previous year’s application.  Also notice the granular soil structure.  Earthworms were easily observed in this soil and their “huts” of leaves and crop residue were prevalent. Typically, we have observed that a ton of PRO CAL 40 applied per acre will last about three years given the rainfall we receive during the growing season.  This gypsum near the surface continuing to solubilize reduces surface crusting over those three to four years.  When you spread the cost of a gypsum application over four years, the c 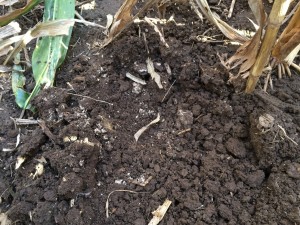 ost per acre is less than $10 in most of our marketing area.  That is very economical considering that many customers have shown 10 bushel or more responses in corn and five plus bushels in soybeans all while improving their soil both short term and long term.  “My soil just keeps improving each year after an application of PRO CAL 40”, said one of our customers recently.  We have experienced the same on our farm.

Why Does The Analysis of my Alfalfa Test Lower Than Expected?

Why Gypsum Works in Your Soil: Part 2 Good Source of Calcium in all Soils
Scroll to top