Two recent articles on intensive soybean management research have similar themes and I thought would be worth sharing. One research article was from Better Crops magazine “Intensive  Soybean Management”…. Researcher was Gueillermo Balboa et al.  (Kansas State University) and the second article was in Corn and Soybean Digest “Understanding 120-bushel soybeans”….Researcher was Sotirios Archontoulis (Iowa State University).  You may want to check out these articles.  I will give my summation of both in this blog.

Water either by rainfall or by irrigation is critical to avoid limiting yield potential.  Canopy cooling may be an added benefit of irrigation under high daily temperatures. In the Kansas study irrigation accounted for 25 bushels over dryland or about 3.6 bushels per inch of additional water.  This is interesting since producers in Nebraska often 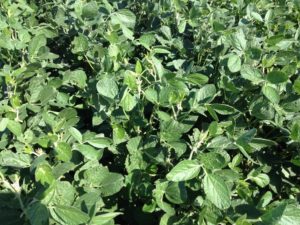 [1]comment that dryland yields are as good as irrigated.  Looking deeper into the Kansas study, the benefits of irrigation were not realized until rows were narrowed, plant populations were increased from 111,000 to 134,000 and N, P, K, S, Zn, Fe, B nutrients and fungicides/insecticides were included.  We must also consider diseases when increasing populations.  If you are in an area where white mold is of concern, narrowing rows and higher populations may create an environment more favorable for this disease.  The Iowa study also suggested narrowing rows and higher seeding rates along with earlier planting and longer maturity varieties can help realize better water and sunlight efficiency.

Although the Kansas study didn’t address planting date, the Iowa study stressed the importance of early planting to capture more sunlight for a higher yield potential. Nebraska research has shown that a soybean plant will put on one node every four days on average so with earlier planting there is potential for more nodes to set pods giving a higher yield potential.  Management for SDS should be a consideration when planting early if your field has a history.

Both studies stressed the importance of light interception……the more sunlight captured the more photosynthesis and, in theory, more food produced for either biomass or seed production.

Having adequate plant nutrition to produce a plant architecture early to sustain the demand on the plant during the reproductive stage is important. But balanced nutrition during the reproductive stage and having good nutrient release from organic matter later in the season is critical for producing plant biomass and high yields.  If nutrients aren’t sufficient to meet this demand supplementing with foliar applications should be considered.  Having a good environment for biological activity is important.  Eliminating as much stress as possible will also allow more energy produced by photosynthesis to be used for seed production.  Soil conditions were not addressed in either of these research papers but I know that soil is a factor in nutrient release, biological activity and in nitrogen fixation by nodules.

High yield production in any crop is a systems approach.  You can’t realize the benefits of one component if the others aren’t being addressed as well.  For example, earlier planting may not give you the added benefit if you don’t have adequate fertility or you don’t capture as much sunlight due to having wide rows.  In another example, foliar diseases can suppress the amount of sunlight captured which may reduce the early plant development.  This could reduce the amount of nodule development which could affect the amount of biomass produced later during the reproductive stages.  Sunlight interception and conversion of sunlight into energy most efficiently is paramount in all crops to raising our yield levels (of course with sufficient water.)