This year one of our customers applied PRO CAL 40 to the area of his field where the poorest soils (highest magnesium and clayey soils) were. He did not apply any PRO CAL 40 on the better soils (Kennebec).  Otherwise he treated the field the same.  As the picture shows below, the soils that he called the poorest appeared to be the best after the PRO CAL 40 was applied. This picture was taken June 1st.

Picture 1.  Response from PRO CAL 40 application.  PRO CAL 40 was applied at 1 ton/acre on area to the left. 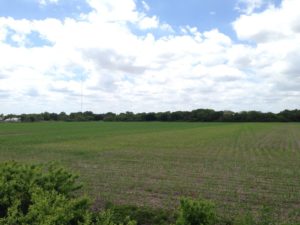 Below is a picture of the closeup of the plants.  The plant on the right from the treated area was darker green, larger, more girthy and had a larger root system.  Notice the yellow striping of the leaves of the plant which did not receive PRO CAL 40.  This striping could be caused by a deficiency of several nutrients, but in this case, it is most likely sulfur and zinc.  Zinc was applied in row in the starter which was applied across the whole field, but tissue tests showed that zinc levels were still deficient where no gypsum was applied.  Plant tissue tests revealed that the most significant increases in nutrients from the PRO CAL 40 application was zinc, sulfur and calcium, but also showed slight increases in nitrogen, potassium, and magnesium.  The increases in these were most likely a result of improved root growth and a healthier plant.

PRO CAL 40 does improve soil conditions and has a significant effect on root growth. Although we concentrate often on our most troublesome soils this shows that PRO CAL 40 can also benefit our better soils. 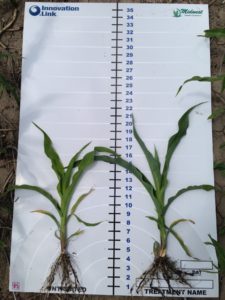 Picture 2. Comparison of plants where PRO CAL 40 was applied vs. no application.  Plant on right received 1 ton of PRO CAL 40 per acre.