The plant analysis that we have taken have shown some interesting results.  Although we have seen difference among farmers and fields, a couple of nutrients that have often shown low or deficient have been manganese and boron.  This makes sense because boron is a mobile nutrient in 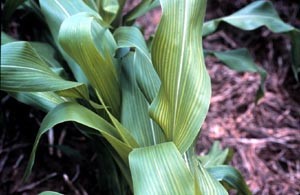 [1] the soil and with all the rains received over the past two years in our area we would expect that plant available boron levels would be low.  Keep in mind also that boron is considered immobile in the plant so if boron levels are low, you can expect them to continue to be low through the season.  Boron won’t easily translocate from one part of the plant to another.  Both Fred Below and Roy Flannery research showed that boron uptake is greatest during the V10 to tasseling stage, but also very critical is the period just after pollination through milk stage of ear development.  A foliar boron application either before pollination of after pollination can help satisfy these peak uptake periods.

Also, manganese availability is affected by multiple years of glyphosate so it isn’t surprising that plant analysis reveals low and deficient levels. The picture to the right is typical of a manganese deficiency.

It is interesting, however, that all of our fields where we have been applying higher rates of gypsum over a period of five plus years showed sufficient or high levels of manganese.   This has been previously documented in other fields.  It doesn’t seem to be coincidental and this has also been confirmed by research.