Research conducted on farms across Iowa, Nebraska and South Dakota has shown a positive yield benefit from using humic acid in 24 of 35 fields (See Chart Below).  The results were even more conclusive when targeting lower organic matter or eroded soils and/or fields that were under drought stress.  Although drought stress increased the chance of getting a yield response, the greatest yield response was observed in a North Central Nebraska Irrigated field where a 71% increase in yield was noted. 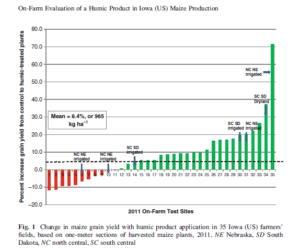 Noteworthy is that most of these humic acid applications were applied at the same time as a pesticide, primarily herbicide, was being applied. This results in less application cost since the pesticide was a planned application.  However, benefits of humic and fulvic acids are usually greatest when applied with plant nutrients.  It is my opinion an even higher confidence of response could be realized if applying these products with nutrient applications.

Responses have also been observed in soybeans where humic acid has been applied. In 2013, pod counts have increased as much as 23%, however, due to late season stresses, yield responses were 7% higher where humic acid was applied.

In Conclusion, Humic and Fulvic Acids are tools farmers should be using to improve yields across their farms. Some ways to assure consistent responses are:

Using Humic Acid and Fulvic Acid can reduce the variability in yield that a farmer experiences across his fields due to differences in soils. Call us at Soil Solutions if you are interested in trying Nature Gro (Fulvic Acid) or Nature Gro (C) (Humic Acid) on your farm this year.